I arrived in Bahrain and everything was closed for the first 3 days, Muharram. So I wandered the streets some of which had crowds dressed in black, with people cutting themselves up and bleeding all over their white robes, I beat a hasty retreat, wasn’t game enough to take any pictures either.
Armoured cars and police at every corner, probably a result of the recent bombings, warnings to stay away from certain areas but many I met said “Welcome to Bahrain”.
Public transport is practically non-existent, metered taxis are the only way to get around and as they are not cheap illegal taxis are common, ask reception at your hotel to arrange one, cost for 4 hours is 15 dinar or $37, the fare from Manama to the Airport is 4 dinar or $10.
The Gulf States fascination with spending huge amounts of cash on reclaimed land is baffling as there is no shortage of land. 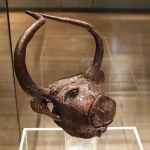