After yesterdays snow and freezing temperatures I was not looking forward to today but when I woke up it felt warm and the roads were dry, the land lady said that the town had run out of petrol yesterday, tankers were expected overnight, then gave me direction to ride past 3 gas stations and if they were all empty to come back to the hotel hahaha.
Left at 0810 found the first gas station 2 cars queued up filled up and left at 0825 heat controllers only on half, neck warmer pulled up to just under my nose works really well stops fogging, no traffic winding roads through the mountains snow on the side of the road, once onto the plains on the other side the wind picked up and it started to get cold cranked up the controllers to full, wind started blowing a gale got to Rio Grande at 1030 queue at the YPF about 7-8 cars in front filled up and left at 1050, wind blowing even harder now and very cold got to San Sebastian Argentina border at 1140, the Aduana guy there took the TVIP off me and he shouldn’t have, left at 1150 dirt road now rode to the Chile border at 1215 had to be issued a new Chile TVIP again for the next 3 hrs, then the customs people made me open all three boxes, I am not even stopping in Chile, they also made them take all the bags out of the tourist busses and put them through the xray scanner and the busses are also driving through not stopping, not very intelligent, left at 1240, strong wind blowing me sideways in the dirt and a continuous stream of traffic coming towards me cars and trucks and the wind is now blowing the dust across to my side straight into my face, all the people returning from the mainland after the long weekend got to the end of the dirt at 1455, 2:15hrs 30min more than going the other way shows how bad the conditions were.
Still blowing hard but new concrete road got to the ferry at 1515, topped up tank with the 6lt gusts nearly blowing the bike over ferry arrived at 1600, rode on only half full got to the other side at 1615, rode off first did not want to get stuck behind the 3 tourist busses, got to the Chile border crossing at 1655, huge queue joined and after half an hour asked the Argentine Aduana guys if they could do the TVIP while I was waiting in the queue and the guy said I was in the wrong building to go to the one further down the road, the one I was told to bypass on the way in, wasted 35 min disorganised, rode 1k and parked again and went in, no queue thank god immigration took 2 min then aduana and the confusion started because the guy had taken the TVIP off me when he shouldn’t have, they got it sorted and then issued me with another TVIP left at 1810, wind had died down or maybe it was behind me flying along then 9k’s out of Rio Gallegos, police checkpoint and I had to go inside where they wrote down my passport details into a ledger and I rode on, queue around the block at the YPF hahaha, got to the hotel at 1900, 577k’s in 10:50hrs what a day, half of it spent queuing.

Left at 0740, queue at the YPF took 40min then discovered that I could have jumped the queue because they had 98 octane but how do you leave the queue to check when you are so far back, blue skies but cold and got colder with side winds blowing but not as bad as yesterday got to Piedra Buena at 1040 another queue but only a few cars, filled up and left at 1100, tail wind now very easy riding no buffeting and quiet very little traffic, got to San Julian and the YPF on the highway was out of gas, they said go into town hahahaha like last time rode in and there was a queue a mile long so turned around and headed for Tres Cerros, tail wind again sitting on 100kph now hardly using any fuel, they were out of gas as well (thats 500k’s and no petrol) but said Fitz Roy had gas, topped up with the 6lt container, tank showed full so I knew I could make it to Caleta Olivia without stopping and I did no problem, long straight stretches of flat treeless plains or null arbor, the pampas checked in at 1630, 710km in 8:50hrs.

Left at 0730 cool and cloudy and windy lots of traffic upto Comodoro Ravadavia with deeply rutted roads got through it ok and then flat open country sitting on 110-120kph very little traffic except near the big towns, no gas problems now small queues filled up as scheduled at Garayalde tailwind after that to Puerto Madryn filled up again then side and head winds all the way to San Antonio, stopped at an Esso and filled up cost 50% more ??, checked in 1530 way earlier than expected made really good time 773km in 8 hours, this is a sea side resort town and it is hot now.

Left at 0800 no heated vest or jacket, cold overcast went down 251 instead of 3 should be shorter and less traffic as it is inland not on the coast, countryside has changed from the null-arbor scrub desert to farmland with endless fields and eucalyptus have re-appeared, long straight roads no hills here, filled up at Rio Colorado, Esso again expensive, got to Bahia Blanca and went through down town instead of the bypass no signs making good time not much traffic sitting on 110kph cars overtaking me slow trucks but straight roads means easy overtaking, got to Tres Arroyos filled up at a YPF fuel only 5.199 instead of the 6 something at the Esso, could not find a hotel but only 1500 so decided to keep going stopped at Benito Juarez, checked in at 1630, 698km in 8:30hrs, nearly there only one more day to get to Buenos Aires.

Short ride today left at 0920, no liners, cool and cloudy wet road with a few drizzles no rain lots of traffic coming the other way with the usual crazy overtaking heading out of BA to the coast for the long weekend this is the second long weekend in a row, stopped at Flores for fuel and the roads were dry after that, put the Nokia around my neck got to a freeway about 70k’s out of BA that took me all the way to the centre checked the Nokia to make sure I was on the right track but I had also written down the names of the freeways, traffic built up as I got closer got to the hotel no problems checked in at 1430, 404k’s in 4:50hrs.

The hotel had scales in the bathroom and its official, my weight has gone from 81kg to 74kg in 4 months, its called the Ushuaia Diet hahahahaha. 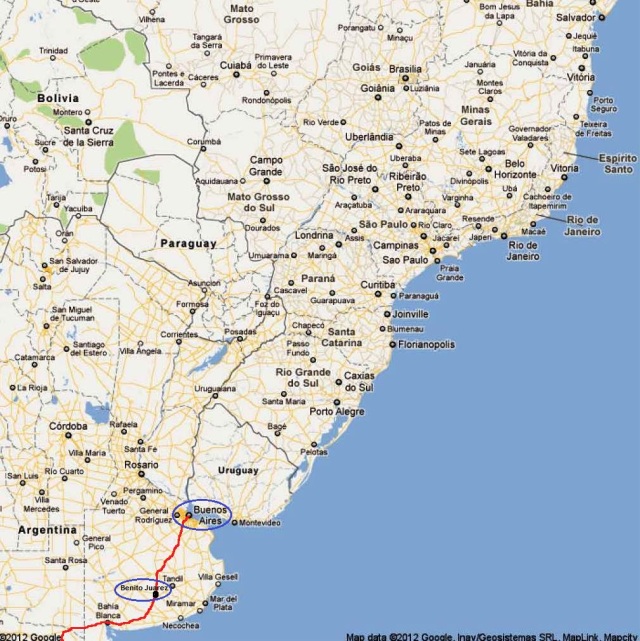 Like Loading...
This entry was posted in Argentina, Chile and tagged Border crossing Argentina Chile to Ushuaia, Suzuki DL650 Vstrom. Bookmark the permalink.