Left Arica at 0700 pitch black due to the 2 hours time difference its really 0400 in the morning, the Chileans have 2 hours of daylight saving all year round, it only got light at 0800, straight into some low mountains upto 1200m cold as I had taken the liner out of my jacket and wasn’t wearing the pants, descended to Iquique and sea level warmed up this is a big city stopped on the outskirts at a Shell service station did not want to have to ride through a huge town, guy there knew English and gave me direction to the highway plus the Nokia has maps of Chile, they also had a Peru map, out of town and along the coast all the way to Antofagasta beautiful views winding roads not a blade of grass or tree in sight, desert all the way, hardly any traffic, 110kph most of the time cops with a radar at a small town where the speed was 60kph I could see them from a mile away, stopped again at Tocopilla for gas small dusty town, then about 50k’s out of Antofagasta road works and diversions slowed and took ages to get through, got the Nokia out and followed it to the hotel, arrived at 1600, 723km in 9hrs. I booked the hotel online and thought it was $48 but turned out to be $48,000 pesos or $101 plus parking was another $10 and it was nothing special, have to open my eyes next time.

Left Antofagasta at 0615 the parking guy said the ticket was $20 but if I gave him $10 he would be happy hahahaha, dark again took about 30min to get onto R5 not much traffic through the hills got to over 2000m cold, sun rose at 0730 and it slowly warmed up, started to run low on gas and had to go 22km off the highway and back, to Taltal to fill up, 40min delay, crazy no gas station on the highway only in the towns, doing 110kph most of the time and sometimes 120kph, 4 lane toll road from Caldera got to Copiapo and same thing again had to leave the highway and go into town to fill up still 4 lanes upto Vallera, cheaper toll for bikes unlike Peru. Ecuador and Bogota where bikes are free, several long road works with a mile of traffic waiting I rode down the side and got to the front saving a lot of time, last 50k’s into La Serena was through some hills, lots of trucks and slow going finally got there and it was a madhouse, thousands of local tourists this must be a popular holiday spot, asked a taxi driver for a Hotel I found on the web got there at 1715, 958km in 11hrs, expensive dump, there must be a shortage of hotels in these coastal towns. Fuel is the most expensive so far as well at $1.64/litre or $6.23/US gal, so todays ride cost me $78.55 in fuel alone, a long day.

Left La Serena at 0710, no traffic 5 min to the highway then 4 lanes all the way to Santiago with the speed limit now at 120kph most of the time, a bit of green now for a while along the coast, stopped for fuel at one of the few fuel stops along the highway bike chewing up the gas at the higher speeds plus freezing cold for the first 3 hours, stopped about 50k’s out of Santiago and put the Nokia around my neck, soon after traffic started building up and some crazy behaviour but nothing too bad, followed the freeway and when it merged with another freeway it took me on the wrong freeway, got off at the first exit and using the Nokia found my way across the downtown area to the other side, first looked for the Suzuki dealer on Bella Vista Ave but he did not exist, gave up and rode to the hotel which is just around the corner, one way as usual and the booking.com location was wrong again asked a few people and finally rode back the wrong way down the street and checked in at 1300hrs, 484km in 5:50hrs, really nice apartment, kitchen, sitting room, bedroom, walk-in cupboard and bathroom everything new and modern and the price is normal as well, contacted a workshop recommended on two other blogs, the owner Paul Celery speaks English and organised to have new tyres fitted, bike washed and new plugs, brake pads and air filter, work could only be done on Monday as everything is closed on the weekend, sent a guy on a bike to the hotel to guide me to the workshop where they started by cleaning over 3 months’ worth of dirt and oil off the bike, left the bike there and got dropped off at my hotel, that’s what you call service. http://www.motolatam.cl . Tyres still had some life in them but not enough to get me down to Ushuaia and then to Buenos Aires, better play it safe as down south there is nothing but bush, another long day. 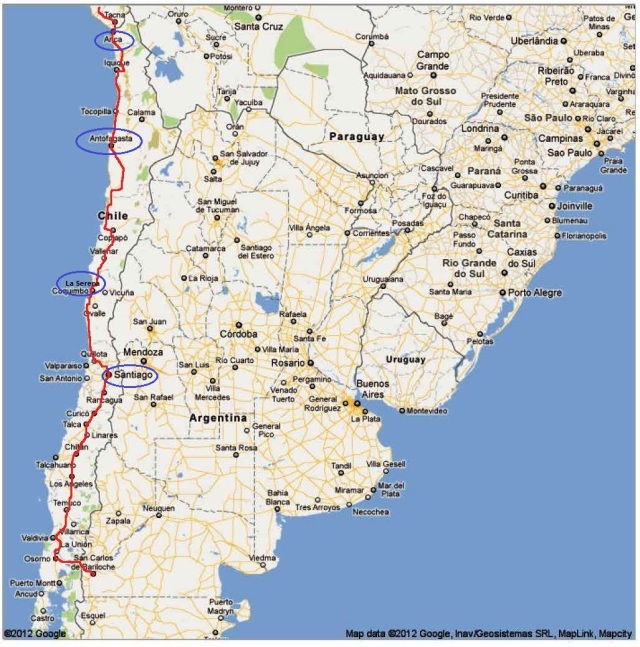