I left La Libertad, El Salvador at 0920 got delayed a bit because there was some sort of procession in the street with a band banging away followed by a long line of traffic, lucky they were going in the opposite direction to me. Uneventful ride cool fairly good roads not much traffic lots of small villages most of the time doing 80-90kph got to San Miguel at 1140 after 154km in 2:20hrs still feeling crook, stopped at the Comfort Inn on the outskirts of the town, got something to eat and to bed. Left at 0810 the next morning running on Cold tablets did not go through the town went straight back out arrived at the Honduras border at 0900, some guys waved at me about 2k’s from the border so I stopped, they said they would do all the paperwork for $10, I said ok and followed them, long line of trucks rode to the front and stopped, a crowd of “Helpers” appeared but I told them I already had one, handed over documents to  my Helper, he made some photocopies and got a signature. 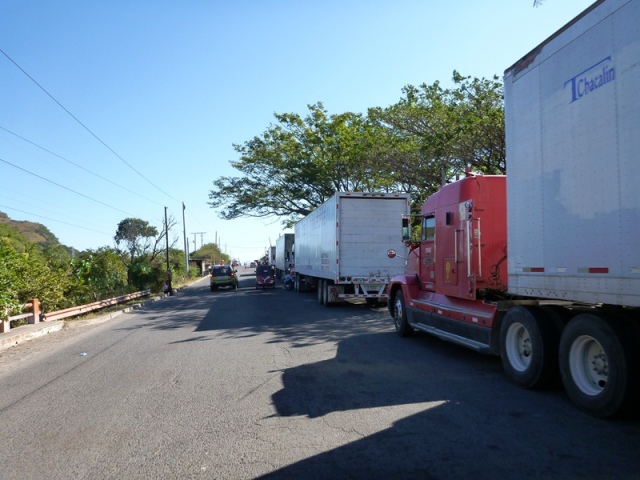 Rode on to the El Salvador Immigration and Customs building 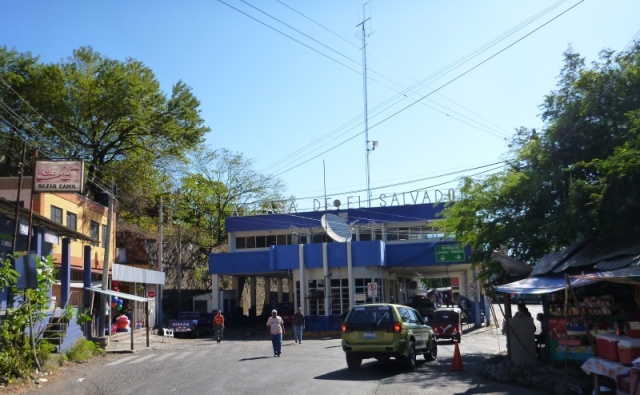 Park here and queue for Immigration

Immigration Queue, the Immigration Officer checks your passport and gives you a small ticket, my passport is so full of stamps these guys can’t find the previous entry and exit stamps so its a good idea to note the page of your previous entries and exits so you can point it out to them, this guy traced my entry from Mexico to here and El Salvador does not stamp your passport ? While I was doing this the Helper got my El Salvador TVIP cancelled, again there is no cost for El Salvador Immigration and Customs. 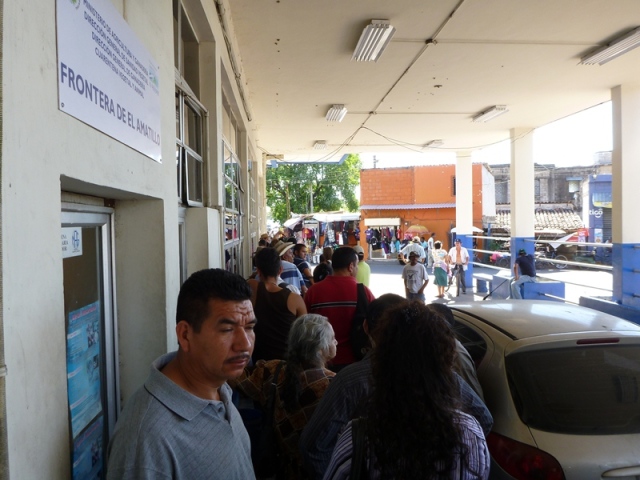 Cross the bridge into Honduras

Honduras Immigration and Customs, ride around to the right and park somewhere, I just waited with my bike the Helper’s did the rest.

While waiting 2 other guys appeared one was the Honduras Helper he took charge here and took me with him to see an Immigration and Customs Official, she explained to me that there was a $3 charge for Immigration and $35 for the Bikes TVIP and that I should not pay any more, I paid the second Helper the money and went back to waiting.

While waiting the first helper who had by now acquired a mate who spoke good English started their scam saying that there were lots of other procedures that would require more money  yadayada, I told them I was paying only $38 as specified by the Government Official and not a cent more, a bit later he came back with the required paperwork and said that due to a power failure it could take another 12 hours but he bribed someone and got my papers put on top of the pile yadayada, I took all the documents off him, including the originals checked them twice and put them in my pocket then gave him $20 double what he asked for originally, they continued to hassel me, I just said NO and put my Helmet on, he said F’you and walked off, how do you pick a good Helper, no idea because they are really nice in the beginning, I read another blog where the guy got scammed of $200. Total time taken 2 hours and cost to me $60 – TVIP $35, Visa $3, Tip $20, Photocopies $2. I only finished up with one receipt for $3 hahahaha, there did not appear to be any official corruption but maybe the TVIP did not really cost $35 as there was no receipt. Anyway I was glad it was over and rode on stopped again a few hundred meters on and I handed over a copy of the Honduras TVIP and finally on the road.

After a few miles a police stop and I thought here we go again but it turned out to be a legit fund raiser and I put $1 into a slot in a large water container a girl was carrying around to all the cars.

The first half of the road after this was the worst I have ridden so far, large pot holes, vehicles dodging around them on the wrong side of the road hahahaha, landslides, in one case the whole road had disappeared and they had dug into the cliff to get past the drop-off, sections of dirt, cows, horses, bullock carts, not much traffic, small villages, fun ride overall, beats the freeway any day, steep winding climb upto 1500m then down to 1000m for Tegulcigalpa, a couple of wind farms at altitude, second half of the road was good. Got to the city at 1300 and spent another hour getting to the other side where my hotel was located, strangely my Nokia N8 had maps of the city so it was easy to find my way around and there is a really good ring road around the city which is set in the middle of the mountains with not a straight road in sight. 6 hours and 210km for the day with only 2 hours at the border a lot less than I thought it would be based on other reports.